The Power of Language to Unite Us 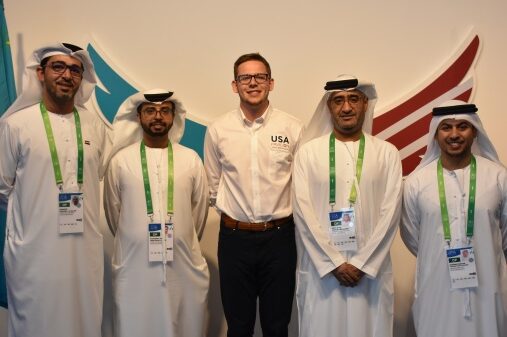 Of the thousands of interactions that I have had over the course of the past two weeks, one in particular remains vivid in my mind. I was walking with a group of fellow Student Ambassadors when a visitor of the Expo turned and sought my attention. I turned, greeting him in Russian, and asked how I could help. Stealing a glance at the USA embroidery on my shirt, he promptly requested directions to our Pavilion. Naturally, I obliged. He thanked me, and then chanced one last question: from where did you come?

Without reservation, I proudly told him that I am an American, then watched as a look of disbelief crossed his face. He then proceeded to question just what I meant by that statement. “Ah, so you study there?” I replied just as I had to the first question: I am an American. This answer didn’t quite relieve the puzzled look on his face. After a few more rounds of questions similar to the first, we parted ways. Only once I had rejoined my peers did the thought cross my mind: he couldn’t believe that an American could speak Russian. At that moment, I knew that the mission of the USA Pavilion had been successful, and would leave a lasting impression.

As Student Ambassadors, many of us are multilingual, speaking the languages of our parents, learning new languages, and constantly working to connect with people from around the world in their Mother Tongues. This simple fact represents an extraordinary effort to learn about new cultures through language, which, I would argue, is the best tool that we have for exploring the globe. More than this, the aforementioned interaction demonstrated clearly that Americans don’t have a set of defining characteristics that identify us as members of our own country. There is no ‘typical American,’ and that is the beauty of our mission here in Astana. Over the course of the Exposition, these daily, seemingly trivial interactions will serve to shatter preconceptions, develop a newfound rapport, and demonstrate that Americans do, in fact, take interest in the world at large.

Yes, it is true that I am grateful to be an American citizen; however, I am even more grateful for the opportunity to share with everyone the beauty of our homeland. At the end of the day, we, as Americans, must rejoice in our differences, because they may be the only thing that we have in common, and that’s a wonderful thing.

This post reflects the opinion of the author and not the USA Pavilion and its sponsors.

Beyond the Classroom: Creating Youth Development Opportunities in Kazakhstan