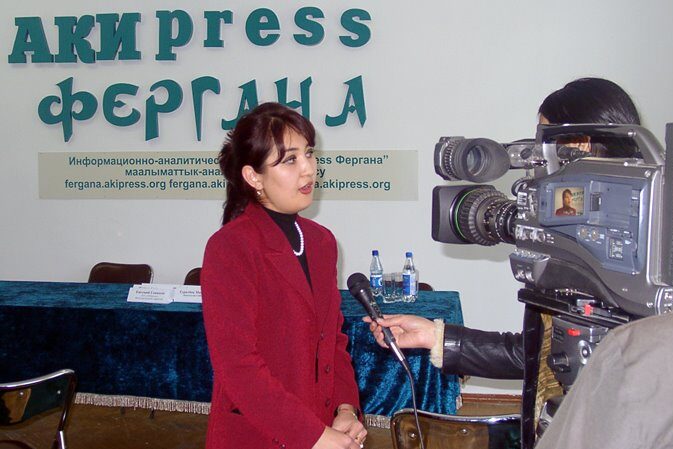 One night while watching online videos, Kyrgyz journalist Zarema Sultanbekova stumbled upon a clip from a classroom in Naryn, Kyrgyzstan, that shocked her. Recorded on a cellphone, it showed a school director repeatedly kicking and punching a student. Zarema quickly tracked down the identity of the school director and broke the story for Kloop.kg, an independent news website that aspires to be the BBC of Kyrgyzstan. She also sent the video and story to the Kyrgyz Ministry of Education and the school director was fired the next day.

Zarema is one of the young people in Bishkek, Kyrgyzstan who report first-rate stories for Kloop.kg. Since Kloop launched its journalism program in 2008, it has trained hundreds of aspiring young journalists to ask tough questions, use multiple sources and present stories from a unique angle. Averaging 6,000 unique views each day, Kloop has gained a reputation for producing first-class writers whose reporting is both independent and well-balanced.

“It’s amazing to see a 15-year-old boy writing about politics in Kyrgyzstan,” Zarema said. “The program motivates young people to understand what’s going on through talking and writing about events in the country.”

Kloop has become more than just a journalism school. It has also created a network of young people in Bishkek who are interested in politics, art and culture, and given them a forum for dialogue and exchange. For students like Zarema, Kloop has greatly influenced their personal identities and professional aspirations.

By the time she was a sophomore in the journalism department at Bishkek’s Kyrgyz-Russian Slavic University, Zarema felt there was nothing more for her to learn. “There are no real journalists on faculty,” she said. “The degree program wasn’t practical enough. The only thing they teach well is literature.”

After first learning about Kloop on Twitter, Zarema saw an opening for a full-time Russian language editor. The prospect of learning by reporting on real stories was far more compelling than staid university lectures on journalism. Zarema put her formal studies on hold, and after two weeks of hands-on training with experienced editors and writers, she began writing her own stories.

Last October, a crowd of 1,000 people gathered in Bishkek to support the nationalization of the Kumtor gold mine. As the crowd swelled, Ata Jurt party leader Kamchybek Tashiev and two other party members attempted to storm the White House, the presidential palace in Kyrgyzstan. They were arrested. With little information coming out about the arrests, Zarema and 30 fellow journalists clamored at the main police headquarters, waiting through the night for updates to come out so that each could be the first to break the story.

“There’s no feeling comparable to being in front of the main police headquarters after political unrest, trying to break the story first. It’s night and cold. You’re thirsty and hungry, but you don’t care. You have to find the right people to explain what happened,” she said.

While Zarema wasn’t first to break the story, her report drew hundreds of views.

Because of Zarema’s strong performance as a Kloop journalist and editor, she was chosen by the U.S. Embassy in Bishkek to participate in an exchange to the United States. It was her first visit, where she met the legendary U.S. journalist Bob Woodward.

While covering the U.S. presidential elections for Kloop, she visited Washington, New York, Reno, Chicago and San Francisco, which was easily her favorite.

She was impressed with the high level of political awareness and the in-depth statistics that American journalists have access to about voting behavior in the country.

“For example, American journalists know that Barack Obama is popular with women with dogs,” Zarema said. “We don’t have this kind of detailed polling information in Kyrgyzstan.”

Zarema’s visit to the US and the relationships she built with professional journalists only strengthened her drive.

In the fall, Zarema plans to move to Russia and start again as a student at the highly regarded journalism program at St. Petersburg State University. With the analytical skills that she learned from Kloop, she is more than prepared.

“Kloop made me a person. I didn’t know who I was before,” she said. “Now I know I’m a journalist and I want to do this for the rest of my life.”

Building on Kloop’s success in Bishkek, Eurasia Foundation partnered with local nongovernmental organizations and universities to launch similar programs to train and inspire young journalists in Kazakhstan, Tajikistan and other parts of Kyrgyzstan. Launched in 2010, the region-wide Kloop program is creating a much needed new cadre of independent-minded journalists in Central Asia. The program is funded by the Bureau of Democracy, Human Rights and Labor at the U.S. Department of State and is implemented by a partnership of Eurasia Foundation, Eurasia Foundation of Central Asia andKloop Media.