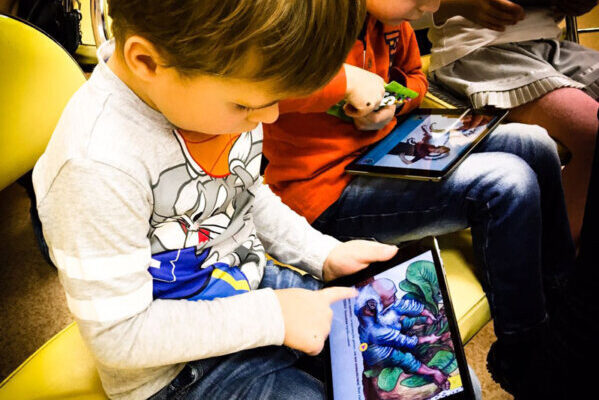 To help deaf and hard of hearing children, Eurasia Foundation’s US-Russian Social Expertise Exchange (SEE) program facilitated a partnership between Austin, Texas-based Communication Services for the Deaf (CSD) and Ya Tebya Slyshu (YTS; “I Hear You” in Russian) in St. Petersburg, Russia. YTS is a parent-run nonprofit that provides resources, support, and advocacy for deaf and hard of hearing children and their families. With funding from SEE, CSD and YTS are implementing the Russian-American Project for Children’s Literacy (RAP4CL).

This complex collaboration requires that the two teams communicate across four languages: American Sign Language (ASL), Russian Sign Language (RSL), English, and Russian. On occasion, they might have to switch into International Sign (IS) to work out the kinks in translation.

The RAP4CL project is grounded in neuroscientific research demonstrating the importance of sign language and written language for language acquisition and literacy development in youth. Its focus is to develop and produce four visual storybooks for deaf and hard of hearing children between the ages of three and seven. Beyond producing the storybooks, the RAP4CL project aims to disseminate knowledge and tools to empower people and organizations to develop high-quality bilingual education resources.

“The first phase of the project took place in September 2016 with the arrival of the Russian team in Austin at the CSD headquarters to begin to figure out how to work together, along with Melissa Herzig and Melissa Malzkuhn of Gallaudet. Drawing upon … Dr. Laura Ann Petitto’s research–also of VL2– demonstrating the neurological connection between visual phonology such as American Sign Language and sound phonology such as spoken English. This research is the scientific foundation for RAP4CL’s storybooks.” (CSD, 2016)

RAP4CL’s visual storybooks are designed to facilitate immersive language acquisition. Storybooks produced by the international team can be played back through apps created using the Storybook Creator program designed by VL2. As described on CSD’s website:

“[The storybook app] has three modes: Watch, Read, and Learn. In the Watch mode, the entire story is presented via ASL. In Read mode, children can watch ASL videos and read English, for a self-directed reading experience supplemented by visuals – if a child does not know a certain word, they can touch that word and a video in a box pops up, signing and fingerspelling that word. And then in the Learn mode, children build up their vocabulary through a glossary of words that are presented via chaining method, in which the words are signed, fingerspelled, and then signed again.” (CSD, 2016)

Over just a few days, the team learned the ins and outs of using the Storybook Creator program, planned the layout of, and then filmed the storybook, The Giant Turnip.

“The Giant Turnip” (Репка) is a Russian folk story about the collective effort of family members across generations and animals of gradated size in pulling a massive turnip from the ground, the moral of the story being that only through teamwork and the most modest contributions of the smallest party can the task be accomplished. The story is progressive, beginning typically with the grandfather trying to pull the turnip from the ground. The successive support varies based on the specific version, but typically, the grandfather recruits the grandmother, then granddaughter, then family pets, and ultimately, a tiny mouse’s contribution to the group effort is what dislodges the turnip.

In early November 2016, the CSD team traveled to Saint Petersburg and partnered with YTS and the All-Russian Society for the Deaf (VOG/ВОГ), a national deaf-advocacy NGO that has programs addressing education, employment, and telecommunications, in a series of discussions on what it’s like to be deaf in Russia.

Deaf culture in Russia has a rich history dating back to the beginning of the 19th century with the inception of the first Russian school for the deaf, almost coinciding with the establishing of the American School for the Deaf in 1817. As CSD’s reflections put it:

“Art, culture, and history are critical components of any strong, proud, and flourishing community, and the Deaf community is no different … there is an opportunity to transcend [the RAP4CL] exchange between our communities – one through which we share the best of our communities, in how we express our culture through art and storytelling, build stronger social cohesion through cultural events … and better preserve our communities’ storied histories. Together with our Russian friends, we can build a stronger community and culture for the global Deaf community.”

However, today many deaf people in Russia have had to come up with creative and practical ways to work around daily challenges. RAP4CL’s Vera and Gena recounted their own experiences in which “if they were asked a question in class, a hearing student would write down the question for them to read … and then they would write their responses for the hearing student to relay back to the professor and the rest of the class.”

The perseverance and determination like that of Vera, Gena, and all of the caring parents of children at Ya Tebya Slyshu is driving Russia’s deaf community to achieving a greater degree of unity. However, through international collaboration and innovation through technology, the deaf communities of Russia and the United States can reach out to each other and form an international community. Tools similar to those developed by RAP4CL allow us to expand our horizons and give us insights into other cultures, stories, and ways of life.

Both the English and Russian versions of the The Giant Turnip storybook app are available on the iTunes app story.